Elliot Gorn, Joseph A. Gagliano Chair in American Urban History at Loyola University Chicago and former Miami history professor, spoke on Wednesday November 14, 2018 to over 150 members of the Miami community on the cultural relevance of Emmett Till in a post-Charlottesville era. Part of the 2018 American Studies Biennial Lecture, Gorn’s talk “Emmett Till: Why His Story Still Matters,” went beyond merely recounting the 1955 murder of Emmett Till by J.W. Milam and Roy Bryant. Instead, Gorn paid particular attention to the cultural norms, events, and racist assumptions of the 1950s, as well as how American media interacts with race. In doing so, he gave context to the events that led up to Till’s murder and the trial that followed.

Gorn focused on specific events surrounding Till’s life and the circumstances of his murder, including its connection to the supreme court case Brown v. Board of Education. Gorn argued that resistance to the Supreme Court decision of desegregation was based on anxieties surrounding black and white intimacy, racist stereotypes of black male sexuality, and beliefs of white superiority and black inferiority. The racist assumption that black men would sexually assault white women pervaded the south and much of the north, which was used to defend segregation. The fear that desegregation would result in intimacy between white women and African American men was at the heart of Brown v. Board of Education and resistance to the ruling, Gorn explained. These racist assumptions about black sexuality played a critical role in Till’s murder as well. Gorn said, “To make sense of what [Brown v. Board of Education] has to do with it, it has to be looked at as Jim Crow segregation. It was about this racist assumption that prevails in the South and much of the North that black and white intimacy is where the real danger is in segregation.” When Till whistled at Carolyn Bryant, a white woman, his actions were interpreted through this racist lens as a sexual threat not only to Bryant but to the racial caste system undergirding southern life.

Gorn also made clear how systemic racism affected the trial and its decision. Gorn used a variety of images and photographs that included courtroom photos of Till’s family and of Bryant and Milam, pictures of the courtroom, court proceedings, newspaper clippings, evidence photos of Till’s recovered ring, and photos of protests to draw attention to structural racism. He explained that while the judge followed the law and insisted that the trial be fair, the jury was made up entirely of middle-aged white men who would never convict a white man of murdering an African American boy. In Mississippi, women were not allowed to be on a jury for felony cases and African Americans were not allowed to sit on juries. Gorn used this moment as an example of the differences between bigotry and institutional racism as well as to discuss how the process of describing something as racist often fails to address larger systemic issues. He said “Calling something racist misses the large point—institutional racism gets obscured when we do this.” Calling Till’s trial racist conceals the nuances of systemic racism, according to Gorn.

Gorn concluded his lecture by explaining why the story of Emmett Till is still important today and why it has remained a part of our collective US history. Using a popular internet meme depicting side by side photos of Emmett Till and Trayvon Martin, who was murdered in 2012, Gorn explained that “racism doesn’t disappear but it keeps changing and is always ready to emerge.” Gorn claimed that the similarities between Till’s and Martin’s murders reveal how the past and present are linked.

For more on Dr. Gorn’s work on Emmett Till, see his book Let the People See: The Story of Emmett Till (2018) or visit his faculty page at Loyola University Chicago.

The American Studies biennial lecture is sponsored by the Humanities Center, Black World Studies, Global and Intercultural Studies, the History department, the Geography Department, and the International Education Week. 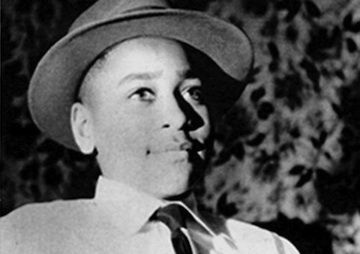